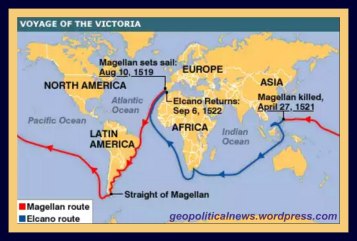 Ferdinand Magellan Trip Around The World

On the 16th of March 1521, Spaniard explorer Ferdinand Magellan, sailing from Spain, reached the archipelago of what was to become the Philippines. With the colonization that followed, the Philippines became part of the Spanish Empire, ending in 1898 when the U.S. Deep State targeted Cuba’s local gold (sugar) thanks to the 15th February 1898 dubious explosion of the U.S.S. Maine battleship in the harbor of Havana. This terrorist act did trigger the Spanish-American war and the beginning of the American Colonial Era of the Philippines. The Spanish-American war was followed by the 1899—1992 Philippine—American War and the Commonwealth period that was designed as a transitional administration in preparation for the country’s full achievement of independence.

During an October 2017 visit to Beijing China, Philippine President Rodrigo Roa Duterte, accompanied by 250 Philippine business leaders, made some remarkable comments that paved the way to what he called “a new commercial alliance as relations with longtime ally Washington deteriorate . . .In this venue, your honors, in this venue, I announce my separation from the United States.” Duterte told Chinese and Philippine business people, to applause, at a forum in the Great Hall of the People attended by Chinese Vice Premier Zhang. “Both in military, not maybe social, but economics also, America has lost.” Furthermore, President Dutarte added “For as long as I am here, do not treat us like a doormat because you’ll be sorry.” He added. “I will not speak with you. I can always go to China.”

Exercises in the disputed South China Sea have been put on hold, and 107 US troops operating drones surveilling Muslim militants will also have to leave the country soon, the Philippines Defense chief said. President Rodrigo Duterte said he wants an ongoing US-Philippine amphibious beach landing drill to be the last in his six-year presidency, with plans to halt all the 28 military exercises carried out with US forces every year.“This year would be the last,” Duterte pledged on Friday in Davao in the southern Philippines, AP reported. Dutarte also made some crude comments towards (former US. President) Barack Obama: the outspoken Philippines leader said his US counterpart Barack Obama, whom he has previously publicly called a “son-of-a-b***h,” should “go to hell.” Experts say the Philippines president’s plans to limit the presence of US troops will thwart Washington’s intention to beef up US forces in Southeast Asia in order to counter China. “President Duterte’s shoot-from-the-hip style of parochial democracy is deeply troubling,” Carl Thayer, an expert on the South China Sea, told AP. “If Duterte moves to curtail US rotational military presence from bases in the Philippines, this would undermine the US ability to deter China not only in defense of Philippines sovereignty, but regional security as well.”

Meanwhile the warmongering U.S. Empire of Chaos is remodeling Guantánamo Bay (Cuba) facilities and planning to invest a mere USD 500 million in new construction, from which USD 250 million for the hospital facilities: five additional beds: USD 50 million per bed.” Not bad for a Zimbabwe money printing style nation with twenty trillion USD debt!

Things are not doing well for the Anglo-American elite, The Bretton Woods Reserve Currency USD is losing its grip on an international community beginning to create and establish alternative competing financial products and institutions:

The AIIB or Asian Infrastructure and Investment Bank is a major development in the international world of finances and a direct threat to US Dollar based institutions such as the Federal Reserve (FED), the IMF (International Monetary Fund), the World Bank, the Bank of England (BoE), the European Central Bank (ECB), the Bank of Japan (BoJ), and last but not least the Bank of International Settlements in Basel (BIS.)

Many of us may not have heard of the AIIB, but let’s not kid ourselves, The AIIB is a major financial threat to the 1944 Bretton Woods International Reserve Currency agreements. No less than 57 countries contributed to the start of the Asian Infrastructure Investment Bank; among others: The Philippines, France, Germany, Switzerland, Britain, South Korea, Canada, Belgium, Hungary, Ireland and Hong Kong.

But let’s get back to the Philippines, three archipelagos became of strategic importance for the geopolitical control of the U.S. Empire: the Philippines, Taiwan and Japan. As a footnote let’s not forget that following World War II, Japan and Germany remained to this very day two U.S. vassal states and US-occupied territories…